I was recently asked to build a tiki head statue for a local restaurant. The lure of rum soaked drinks made the job hard to turn down. I figured my recently acquired CNC router made the task possible for me since I have no formal sculpture training. As with most everything, it seemed simple before I realized what I was getting into. The project was a fantastic teacher and I am much more comfortable with the basics of CNC router operation as a result.

I started my search for a model at the sketchup 3Dwarehouse. Not finding what I wanted there, I found some great 3d models at turbosquid.com and brought the screenshots to my clients. They picked the one they liked.

I downloaded the file. I would need to do a little 3D editing (I use Rhinoceros) to make the shape machinable. I made the eyes and area between the teeth less deep and I modified a few other contours to make machining easier.

I then set off to figure out how the heck I would build the thing.

What material would I use?

The plan called for a 4′ tall, 18″ diameter statue. I had considered using polystyrene foam. It’s light and easy to cut on a CNC router. It’s fairly inexpensive. I figured I would then paint and coat the finished foam to make it look like weathered wood. This plan seemed solid until I realized I don’t possess the skill to faux paint foam to mimic wood.

I then decided I would construct this thing out of actual wood. I am a woodworker, after all, so I know what it takes to fix the inevitable mistake. I checked out the local lumber yard and found a great deal on some 10’x6″x6″ cedar timbers. Since the original plan was to place this on a patio, cedar was a great choice. It is naturally weather, rot, and insect resistant.

I brought the planks home and began breaking them down so I could glue up three 4′ x 18″ x 6″ slabs.

Next I had some work to do to create the toolpaths. I use Aspire to do my toolpathing and much of my design work. It’s fantastic to be able to edit your design and tool paths without having to jump between software. I imported the STL file into Aspire and set the model size. I used its slicing feature to create 3 separate 6″ thick slices. To accomplish this, I first positioned my model so that it was laying face up on the table plane. Then I was able to run the slicing command. The software prompted me for my material thickness. I accepted the settings and 3 separate model files were created. Now I could open each of these and design my tool paths appropriately for each. The first layer would be machined from the front. The second (middle) layer would be machined from both sides. The back would be machined from the back. Aspire allows for 1, 2, and 4 sided machining. I used 2 sided machining for the center slice and 1 sided for the front and back.

I have a ShopBot Buddy (which I love) and at the time it was outfitted with a 4′ x 4′ table. This was just big enough in length and width. The main obstacle I needed to work around was the Z travel, or in other words, the maximum amount the machine will move up and down. The machine in it’s current setup allows for a max of 8″ of travel and has just over 6″ of room under the bracket that holds the router. I had planned to use 6″ thick slabs which meant I could use 2″ long bits. This didn’t seem like a problem to me at the time but I in hind site this was a decision that made things much more complicated.

Here’s how to figure out your maximum depth of cut.

Take your total Z travel (from the uppermost limit until the collet hits the table). In my case this is 8″. Divide that in half and you get 4″. This is both the thickest piece of stock you can cut as well as the longest bit you can use while still being able to move the bit up and over your stock without cutting it.

Like I said, I was committed to using 6″ thick stock (and subsequently a 2″ bit). This meant that I needed to pay extremely close attention to the machine and anticipate where the collet might bottom out either on waste or the carved model itself. Some CAM software allows you to model your CNC machine so that you can verify if there will be any collisions ahead of time. This was a major time-sink since I had to babysit the machine much of the time, pausing the file occasionally while I hacked away at waste or other high spots. LESSON LEARNED! Next time I will use 4″ stock and 4″ bits.

I started with the roughing pass using a 1/2″ 2-fluted square endmill. I set the max depth of cut per pass to 1/2″ (a general rule of thumb is you should not cut deeper than the diameter of the bit per pass). I set the stopover to 90% (90% of the bit is cutting fresh material on each pass) to get the job done quickly. I started with a moderate feed rate of 2in/sec and a spindle RPM of 14,000.

Once the roughing pass was finished I switched to a 1/2″2-fluted ballnose bit to complete the finishing toolpath. I set the stepover to 10% to give myself an easier time sanding. Again I started at a moderate 2in/sec feed rate with a RPM set to 14,000. I was able to use a slightly longer bit now that the roughing pass was complete and there was a bit more space between the top of the model and the spindle bracket (the blue blur in the upper left of the photo below). This allowed me to complete the finishing pass with a minimal amount of babysitting. There were only a couple of areas where I was concerned about the collet bottoming out.

The process was precisely the same for the back third. The center portion was machined once from the front and once from the back. I used a fence that I attached to the table to register the middle section once I flipped it over. Because of the shape of the center section, there was a 2″ ridge of wood that could not be directly machined. 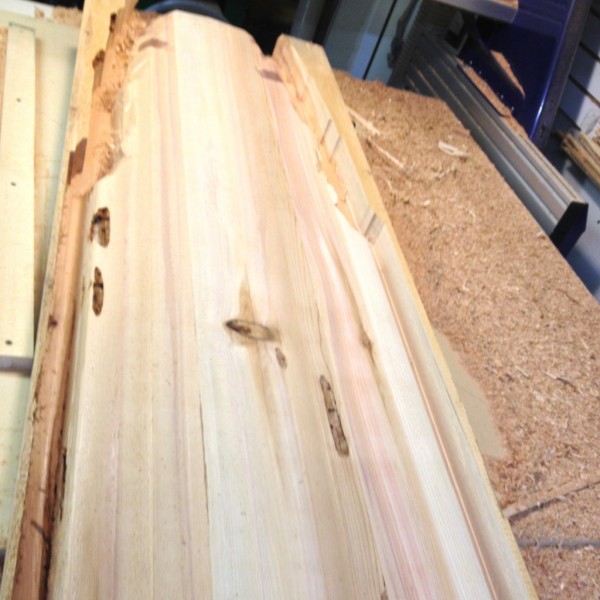 Once all three slabs were shaped it was time to assemble. This was a bit of a challenge and I needed to get creative with my clamping techniques. Two quarts of glue and a day later I was ready to take the clamps off and do some hand shaping.

I used a combination of hand scrapers, die grinders, and an angle grinder loaded with a sanding disc to remove the tool marks and add a few details to make it look more authentic.

I finally applied some waterproofing deck finish and some black and white accents to make his features really pop.

The client was thrilled and I love to pop in from time to time for rummy cocktails and a look at the finished product perched above the tiki bar.

Check out some of my other projects at www.treeonahillworkshop.com and blog posts at www.tinkerandfutz.com.